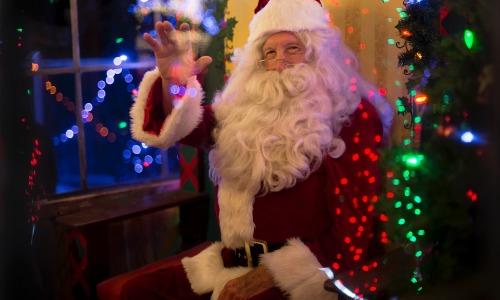 Christmas is a universal vibrant episode geared with the most loved eternal symbol of the event, your dear Santa Claus. Santa Clause is the traditional gift giver who lavishes gift on children on Christmas Eve.

The OriginToday s Santa Clause is derived from a figure of a Dutch folk tale. This tale tells the story of the real Santa Claus, St Nicholas, a bishop from Turkey who bestowed presents on the poor people. Thus was born the legendary figure of Sinterklaas and your favorite Santa Clause is the result of its American mispronunciation.

But the lovely pictures of Santa wearing the red coat, the fur boots having a long flowing white beard is derived from the Russian figure Ded Moroz or Grandfather Frost .

Who Is Santa Clause?Santa Clause is a happy, kind-hearted and pot-bellied man who wears spectacles and lives with his wife Mrs. Clause and the elves. These elves make toys. On the Eve of Christmas, Santa Clause visits the houses of the village in his sleigh pulled by flying reindeers. He enters the houses through the chimneys and goes out through the fireplaces.

Santa s HomeNobody really knows the real address of Santa Clause. Some people say that he lives in northern Canada and according to some he lives in the North Pole. Some other guesses place the residence of Santa in Dalecarlia in Sweden, in Korvatunturi in Finnish Lapland and in Greenland. L. Frank Baum thinks the real address of the snowy village of Santa Clause is The Laughing Valley of Hohaho.

The laughter of Santa Clause, the booming ho ho ho is the life breath of any Christmas party. This sonorous laughter sprouts from the merry round belly of Santa, as written in the traditional Christian poem; A Visit from St. Nicholas which says that Santa has … a little round belly
That shook when he laugh’d, like a bowl full of jelly

Traditionally there are eight reindeers that pulls the sleigh of Santa Clause, namely Prancer, Vixen, Comet, Cupid, Dancer, Dasher, Donner and Blitzen. These names are derived from Clement C Moore s poem The Night Before Christmas .

Santa s ninth reindeer known as Rudolph, the Red-nosed one was formed in 1939 for the Montgomery Ward and quickly became famous.

Today the lovable Santa Claus, ready with bountiful gifts, has become a part and parcel of Christmas celebrations worldwide.