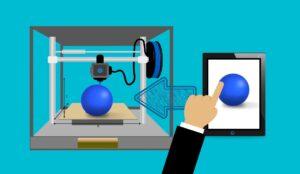 With the advent of consumer-grade 3D printers at lower price points, this technology – which has been around since the 1980s – has recently made its debut in the home office.

But 3D printers aren’t just making an impact at the consumer level. Instead, they’re slowly changing the way manufacturers think about design, prototyping, and even production.

As the technology continues to improve, 3D printers can produce more and more parts at a higher return on investment (ROI) than conventional manufacturing techniques. Could we be looking at a whole new mode of production just over the horizon?

3D printing has grown into a $6.063 billion industry and boasts a footprint in a wide span of industries. In 2016, the “additive manufacturing” industry, as it is known, grew 17.4 percent in worldwide revenues. Last year, nearly 500,000 printers shipped, but that’s nothing compared to the estimated 6.7 million that will ship in 2020.

Companies like Formlabs and Stratasys are experimenting with ways to scale up 3D printing production to make it more competitive with conventional manufacturing methods in terms of ROI. As the production volume capabilities of these printers increase and processes are automated – an essential component of all facets in manufacturing today – the total cost of production is cut dramatically. The result is a more cost-effective product that is created more quickly and with less human intervention.

“[The] 3D printing industry has proven to have significant implications for such industries as automotive, machinery, aviation and more, and the applications will continue to grow as these industries show the technology’s efficiency and effectiveness in production,” John Kawola, president of Ultimaker North America, told Business News Daily. “But 3D printing is part of something bigger: the realization of the next manufacturing revolution – Industry 4.0.”

Industry 4.0, also called Manufacturing 4.0, refers to the nexus of technology in the modern manufacturing space. The vision often includes the internet of things (IoT), machine learning, mixed reality, and robotics, and 3D printing is an integral part of that vision.

The role of 3D printing in the manufacturing process

3D printing already plays several roles in the manufacturing process, and it is poised to make further gains as it is refined and perfected. Currently, design and rapid prototyping are two of the main processes that benefit from 3D prints. 3D printers are also useful in low-volume production, such as when small amounts of products are needed to test the market or advertise at trade shows. And as time goes on, 3D printers’ production capabilities continue to scale.

In every facet of the manufacturing, 3D printers can reduce the time and cost required to achieve a viable product. That is why Jack Beuth, a professor in the Department of Mechanical Engineering at Carnegie Mellon University’s College of Engineering and co-director of the NextManufacturing Center, believes 3D printing should be considered a brand-new technology on the level of personal computing or smartphones.

“Companies are now trying to exploit the technology to become more profitable, and how they do it will involve innovations that are much more than just replacements for traditional manufacturing,” Beuth said. “With additive manufacturing, we are about where personal computing was in 1983.”

Because 3D printers are a more flexible technology, design teams can experiment with structures that are stronger or more interesting, and create complex geometric shapes that previous methods were incapable of realizing.

“The design goals we encourage customers to think about to really unlock the value of 3D printing are lightweight, creating lattice-type structures to reduce the material used; combining assemblies, to reduce labor and assembly steps and the potential points of failure; and the soft costs too, like reducing quality assurance and inventory managed,” said Greg Thompson, global product manager for 3D printing at Proto Labs.

Proto Labs enables engineers to upload their own digital CAD files, and the company turns around prototypes or low-volume runs of the product in 15 days or less.

“Once we have the file, our software incorporates visualization tools and provides a design for manufacturability analysis,” Thompson said. “Then all of that is pushed down to our shop floor, as well as back to the customer with a quote.”

Depending on the nature of the product, Proto Labs supports 3D printing, injection molding, and CNC manufacturing. Its process allows the client to engage with the creation of their design from start to finish. If anything needs adjusting, from lead time for production to the number of materials used for the design, the client will be able to respond prior to production.

“That digital thread is critical because if we had different islands at different steps, we could not deliver the lead times we deliver,” Thompson said.

3D printers have also greatly reduced the time it takes to create a working prototype of a product. Cheaper, quicker prototype creation speeds up product development, reducing costs across the board and hastening the total time to market.

Using 3D printing, several iterations of various designs can easily be created to test and gather feedback, allowing companies to determine early on which is the best model. In the past, this sort of practice would be costly and likely untenable even for the most profitable companies. Today, it is within arm’s length for nearly everyone.

“For the last 25 years, the paradigm for advanced product development has been to do extensive simulation and design iteration before creating first functional prototypes to test,” Beuth said. “Now that is changing; once you have a workable design, you can print a prototype and test it at a minimal cost. This will substantially reduce product development times.”

“In the future, it is possible that all short-run part production will use 3D print,” Benning said. “Focused product teams [will be] able to launch new products on a weekly or daily basis – only constrained by their time and imagination, no longer constrained by the capital assets needed for analog production. This agile development process for physical parts, enabled by 3D print, has the potential to radically improve and accelerate the products we will see and use in the not-too-distant future.”

Dagoma 3D is working on making that a reality. Scaling up production of its 3D printers, which are partially 3D printed themselves, has enabled it to produce 50 to 70 printers per day. The company now boasts three facilities – two in France and one in the U.S. – with a fleet of about 850 3D printers in total. This year, the company expects to ship 15,000 printers.

As time goes on, the number of parts 3D printers can take on while boasting a greater ROI than conventional methods like injection molding continues to grow, Regnier said. Moreover, a production line based on 3D printing technology is easier to tweak.

“I think one of the main advantages … is to be able to adjust and adapt the whole production line with the speed of the 3D printing production lines,” Regnier said. “For example, if we want to improve something on our machine, it’s easy – it’s just one click away. For another technology like injection, it’s not one click away; it’s two to three months away. You’d have to change molds, ship it, make sure it’s ready and working, and then start producing.”

According to Thompson, it’s unlikely that 3D printing will supplant traditional manufacturing, but for projects that make sense, it seems inevitable that 3D printing’s capabilities will continue to grow in terms of volume.

“The 3D printing industry is tackling making machine efficiency higher and keeping the cost of materials down,” Thompson said. “As the industry continues to tackle those challenges, we’ll see more projects that make sense for 3D printing at higher quantities, but I think it will be an evolution towards that.”